Get the best of Water Online delivered straight to your Inbox! sign me up 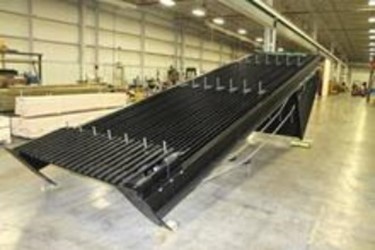 Saginaw County Public Works Commissioner, Brian J. Wendling, recently partnered with Spicer Group, Inc., Fisher Contracting, and John E. Green, to replace their aging liquids / solids separation equipment at the Universal Drain Pump Station in Zilwaukee, Michigan. A new Duperon® Self Cleaning Trashrack (SCT) from local manufacturer Duperon Corporation was installed last month, replacing one of the company’s first SCTs that had been installed in 1985. Saginaw County has two other sites where SCTs were installed as early as 1979 and that are still in service today. The simple design of the SCT is a hallmark of Duperon liquids / solids separation equipment, and the new system is the same as its predecessor, with a few minor improvements made over the last 34 years.

“Duperon was the logical choice when it was time to replace the trashrack,” said Nicholas D. Czerwinski, P.E., engineering project manager at Spicer Group, Inc. “Saginaw County Public Works Commissioner was happy with the performance of the simple self-cleaning design. They didn’t have any major problems with it because there’s just not much to break. We looked briefly at some other systems but the Duperon design is simple, better, local, and there’s already a long-established relationship. The decision was easy.”

Duperon® Self-Cleaning Trashrack, invented in 1979, is a reliable, automated screening system for the harsh conditions of an open channel. Duperon Corporation’s first patented invention, the SCT keeps the screen clean at all times, preventing debris build-up that can cause surface flooding and damage to expensive downstream pumps. Used in communities around the U.S. including Sacramento, CA, and Dallas, TX, the SCT at Universal Drain Pump Station protects the downstream pumps that lift stormwater water into Saginaw River. The Universal Drain Pump Station receives stormwater from highly populated residential subdivisions and commercial buildings; if the pumps were to fail, thousands could be flooded.

“Saginaw County has a special place in our company’s history,” commented Terry Duperon, inventor of the SCT and founder of Duperon Corporation. “Back then, debris would block the traditional bar screens, creating a dam that blocked the water flow to the downstream pumps. I remember being up to my knees in water, standing right in the channel to study the movement of the debris! From those first-hand observations we developed the SCT and changed our focus from the pumps themselves to improving the screens to optimize the pumps.

"I am thankful we've had the opportunity to serve our friends at Saginaw County again, and I'm honored to be part of a partnership between companies in our home town. We believe that business can be a force for good. When we work together like we did on this project, we serve our whole community."

The replacement of the SCT is part of a larger, $6M upgrade to the Universal Drain Pump Station. Upgrades include safety enhancements, building improvements, pump replacements, and a sophisticated controls system that will control equipment including the SCT. When complete, the Saginaw County Public Works Commission will use video monitoring to view the water levels and debris accumulation, managing the integrated system from a remote computer or smart phone.

About Spicer Group
Spicer Group has been providing professional engineering, surveying, architectural and community planning services to clients for 75 years. Our firm has grown from a one-man, home-based operation, into a corporation that employs over 200 professionals. Our headquarters is in the City of Saginaw, Michigan and we have additional offices in St. Johns, Manistee, Lansing, Dundee, Byron Center, and Atlanta, GA.